The International Association for the Study of Pain’s article, What is Complex Regional Pain Syndrome – in plain English; states –

“Complex: Many, many different problems have been identified in people with CRPS. These problems can be severe and usually involve many of our biological systems. This makes the situation complex.

Regional: The symptoms of CRPS are almost always confined to a particular region of the body. The arm of the leg is the most commonly involved region. Sometimes CRPS of one arm spreads to the leg on the same side of the body. Sometimes it spreads to the opposite arm, in which it usually ‘mirrors’ the other one.

So, CRPS is the name given to a pattern of symptoms that often occur together”.

Complex Regional Pain Syndrome (CRPS), is a disorder that can develop after a fracture, surgery, or even a small injury. Distressing and disabling CRPS is characterized by excessive pain, usually in one limb, although it can spread. Changes in skin sensitivity, sweating, hair growth and movement problems are common.

Because CRPS is uncommon, and the range of signs and symptoms, which are not always present, can mimic a large number of other possible conditions, diagnosis may be delayed. CRPS is not evident in x-rays or bone scans and is therefore not easy to diagnose. The diagnostic criteria for CRPS is known as the Budapest criteria.

Treatment will often involve a multidisciplinary approach including; pain specialist, physiotherapy, occupational therapy, psychology, neurology, specialist rehabilitation, and so on. The primary aim is to reduce pain, preserve or restore function, and enable the person with CRPS to manage their condition and improve their quality of life.

The gold standard diagnosis and management of CRPS in Europe and the United Kingdom, published by The Royal College of Physicians and endorsed by the peak representative associations and people with CRPS and their relatives, endorses minimal medications for the treatment of CRPS. These are; codeine, dihydrocodeine, tramadol (only if acute rescue therapy is required, non-steroid anti-inflammatory drugs, paracetamol (as appropriate, Nortriptyline (antidepressant), imipramine (antidepressant), amitriptyline (antidepressant), duloxetine, gabapentin (anticonvulsant), pregabalin (anticonvulsant), intrathecal baclofen treatment (but only in specialised centres).

The guidelines can be accessed here

All of these photos showcase CRPS in many of its various forms. PLEASE NOTE: This information is not intended as medical advice and should not be used for diagnostic purposes. Please seek advice from a qualified medical professional.

The Budapest Criteria, table below, is the diagnostic criteria for CRPS (A-D must apply). 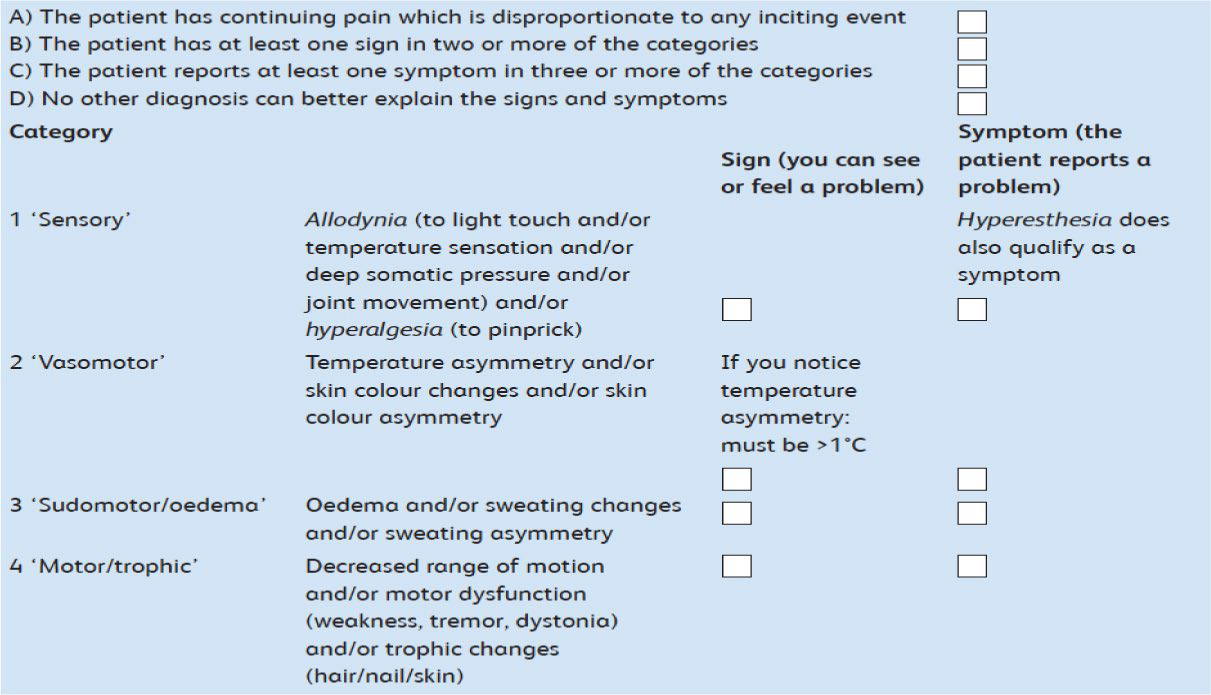 Some possible symptoms of CRPS